Tina suffered many years of abusive relationships resulting in 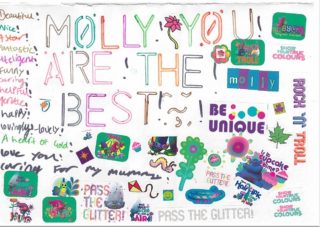 physical injury and severe mental health issues. As a result she developed a drug dependency and, after committing an offence to fund her addiction, found herself in the criminal justice system. Consequently she lost custody of her two children and was sentenced to 18 months in prison.

When Tina moved into Target accommodation she was struggling with her mental health, partly due to losing custody of her children and also as a result of the abuse she experienced for many years for which she had never received any support. However, she had been abstinent from drugs for over a year and had rebuilt a positive relationship with her mother who was now the guardian of her children.

In order to reach her goal of independent living and regain full custody of her children, Tina engaged with all support available to her. Her Target support worker helped her access mental health and domestic abuse services and she attended the Crisis Renting Ready course, for which she achieved the final accreditation. She also spent every weekend with her two children helping them with homework and rebuilding her relationship with them.

As a result of this progress, social services deemed Tina capable of caring for her two children and she was given full custody of the girls. Her next dilemma was that she was in supported accommodation and needed somewhere to live. At this stage she did not feel comfortable moving directly from supported housing into independent living with her children and preferred to move into her own accommodation before moving her children in at a later date.

Her support worker contacted the local authority to establish Tina’s rights as a tenant and was advised that Tina could apply for a two bedroom property immediately through the priority process or accept a one bedroom property and apply for a larger property at a later date. Her situation would be classed as an exception and she would be rehoused in a larger property as soon as she was ready to move her children in.

Despite desperately wanting to live with her two children, Tina made the responsible decision of moving into a one bed property to enable her to get back on her feet. She now has a flat close to her children and intends to apply for a larger property this summer. Tina expressed gratitude to Target for the role in supporting her to reach her goals.